Lou and Monique and Good Girls and Bad Boys

I recently wrote a post for popular crime-writing blog Crimetime about Lou Norton -- but also about how the story came to be about Monique Darson:

In Land of Shadows, Detective Elouise 'Lou' Norton needs to figure out who killed Monique Darson, and whether it's the same monster that stole her sister more than twenty years ago... This story started to germinate in my mind soon after the murder of the granddaughter of the then Los Angeles police chief.

Posted by Rachel Howzell Hall at 8:18 AM No comments:

And on a Wednesday night in June, I was perfecting my hammer fist, an efficient strike that could break at least four of those bones.

For whom the bell tolled.

I excused myself from my trainer, Seth, and padded over to the mirrored wall. I scrutinized my abs, a part of my body that rarely saw the sun and was always hidden beneath silk shirts and six pounds of Kevlar. Not to brag, but my belly looked awesome in this light.

I grabbed my iPhone and towel from the floor and glanced at the phone’s picture of a middle-aged Latino with smoke-colored eyes and a Clark Gable mustache.

And the bell tolled again.

I took a deep breath, then said, “Lou here.”

“You’re not answering your radio,” Lieutenant Rodriguez shouted. Sirens blared in the background.

“Because I’m on the Westside, getting in some exercise.”

Lena, also getting in some “exercise,” was now sticking her ass into Avarim’s crotch and cooing, “Like this? Like this?” Newly divorced, Lena was tiny and dazzling. More than that, she could filet men like a hungry grizzly could filet salmon.

I swiped the towel across my sweaty forehead. “What’s up, LT?”

“A Jane Doe hanging in a closet.”

Unimpressed, I lifted my left knee to my chest and held it for two seconds. “Oh, yeah?”

In this city, Jane Does were always found hanging around. In closets, off bridges, in shower stalls …

“Yeah. A security guard found her in one of those condos over on Santa Rosalia near the Jungle, the ones still under construction. You know ’em, right?”

I had started to lift my right knee but froze. My grip tightened around the phone because yeah, I knew Santa Rosalia, and yeah, I knew the Jungle. From age three and on to my eighteenth birthday, I had lived in that part of black Los Angeles. Worse, my big sister, Victoria, had been snatched off those streets, never to be seen again. I hated the Jungle, and yet I had never left.

“From what the first officer told me,” Lieutenant Rodriguez was saying, “she’s pretty ripe, more than five hours old, and … Hey, you there?”

I stifled a sigh. “Yep. I’m … good.” But his words must have spooked me—Lena had abandoned sexy Avarim to come stand beside me. Big brown eyes wide with worry, she touched my wrist and whispered, “You okay?”

I nodded, even though, no, I wasn’t okay, not entirely. “I don’t understand,” I said to my boss. “Why am I catching this? Last time I scanned the board, there were blank spaces by Guerrero’s and Dolby’s names.”

“First,” he said, “you know the people in that area better than Guerrero and Dolby, so it won’t take thirty years for you to figure out your ass from your elbow. Second: Guerrero and Dolby are on everybody’s shit list for screwing up that Sizzler robbery, and this Jane Doe in a closet could be something, and I really don’t wanna read in the Times that two Southwest Division dicks forgot to fingerprint the scene. I swear those two are SOS.”

He paused, then added, “I know you have two cases simmering right now, but you know and I know that our clearance rate is shit right now. I need the A-Team on this.”

“One more question,” I said. “May I ask why you’re heading out to a suicide? Not that I don’t enjoy your company.”
“Again: she’s on Napoleon Crase’s property. That worries me.”

Yeah. That worried me, too.

“I just want everything done right,” he said. “I already called Taggert and he’s en route to the scene. He’s an ass, but he’s now your ass, so be nice to him, all right?”

He chuckled. “Oh, yeah. You’re a black Marie Osmond. Meet you over there.”
Posted by Rachel Howzell Hall at 2:58 PM 1 comment:

Did you know that LAND OF SHADOWS is available for pre-order RIGHT NOW?

Did you know that this new mystery has received great reviews from Publisher's Weekly, Kirkus Reviews, Booklist and blogs and independent reviewers hither, thither and over there?

Did you know that I've written other books?

The View from Here (digital only)

No One Knows You're Here (digital only)

Do you wanna read them?

Then, I'll tell you what to do:

Enter the drawing to win the RACHEL HOWZELL LIBRARY OF SUSPENSE!

Three readers will be randomly selected to win a signed copy of A Quiet Storm, The View from Here and No One Knows You're Here!

All's you gotta do is:

2. Send the receipt of your pre-order to HowzellGiveaways@gmail.com, either an email or a photographed picture of the register receipt. Proof, yeah? And in the subject heading of that email with the receipt, write LAND OF SHADOWS GIVEAWAY so that I can filter entries.

4. If you've already pre-ordered LAND OF SHADOWS, bless you and hooray! Just send in your pre-order receipt and you'll be entered into the drawing.

Then, the winner will be drawn by random number and announced after the contest ends.

Any questions, just ask in the comment section below.

Email ThisBlogThis!Share to TwitterShare to FacebookShare to Pinterest
Labels: Giveaways, Land of Shadows

I'm back from the UK and it was FABULOUS!

I've never been so busy in my life. I don't think I ever walked that much in my life, either.

The people at Titan Books are wonderful, in particular, Ms. Ella Bowman, publicist extraordinaire. She kept me on task, provided great conversation, bottled waters, dirty curry and friendship. I'll be posting pictures from my trip abroad in later posts but wanted to share two very cool British moments of the LAND OF SHADOWS release.

First, The Times UK piece on growing up in America written by Rhys Blakely and shot by Barry J. Holmes. What an honor!

And on May 21, I visited the BBC to talk about LAND OF SHADOWS on BBC Radio Four "Women's Hour.'. My interview with Jenni Murray is somewhere in the middle.

All of this -- flying over, Crimefest, blogs, crime writers, great reviews, the Tube -- it was a dream come true!
Posted by Rachel Howzell Hall at 9:44 AM No comments:

So what are you doing in the next two months?

How about hanging out with cool people who love cool books in places where those cool books can be purchased?

So we're starting to throw dates on the calendar -- I'll be reading and answering questions about LOS and Lou Norton and writing and life and on and on.

Will you join me?

First stop: CRIMEFEST in Bristol, U.K. I'll be talking for 20 or so minutes on Friday afternoon (May 16) around 3:20 on writing the female detective. And on Saturday morning (May 17), I'll be on a panel about why we readers like stories on the Missing.

And then, back to U.S. For specifics, pop over to www.rachelhowzell.com!

And let me know if you can make any dates -- I'd love to see you!
Posted by Rachel Howzell Hall at 4:16 PM No comments:

Email ThisBlogThis!Share to TwitterShare to FacebookShare to Pinterest
Labels: Land of Shadows, The Writing Life

BOOKLIST reviewed LAND OF SHADOWS and had this to say:

Homicide detective Elouise “Lou” Norton knows that the young black woman hanging in the closet of an unfinished Los Angeles condominium complex isn’t a suicide. She also knows that the development belongs to Napoleon Crase, the last person to see her sister alive before she disappeared 30 years ago.

With a wet-behind-the-ears new partner to train and a husband who’s blaming the time difference while away on business for missed phone calls, Lou already has a lot on her plate. But nobody’s going to get between her and this murder. Lou is a good cop and fun to watch—great instincts, a no-nonsense interviewing style, and uncompromising in her efforts to catch the bad guy. She’s a well-rounded character who can keep her sense of humor even when her work hits painfully close to home. As she tells her
partner, “I’m sassy, but not Florence-the-Jeffersons’-maid sassy.”

Hall’s first book, A Quiet Storm (2002), was a domestic drama about a family facing mental illness; here she moves easily into the suspense genre—where hopefully she and Officer Norton will stay for a long time to come.

Thanks for reading BOOKLIST!
Posted by Rachel Howzell Hall at 12:01 PM No comments:

They're Alive! Independent Bookstores, I Mean.

Recently, my incredible publisher FORGE arranged for me to have lunch with booksellers in northern and southern California. Over Mediterranean in San Francisco, and then Mexican in Los Angeles, we talked about LAND OF SHADOWS, the writing life, readers and books. 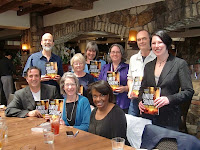 Here's another SF pic -- and the handsome man to my left is my brother Terry. (Thanks for coming, big brother!) 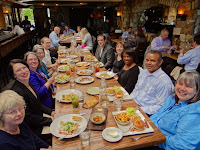 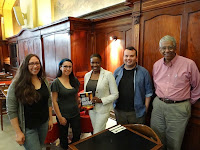 The independent book store is alive and thriving -- go in and buy some stuff!
Posted by Rachel Howzell Hall at 8:35 AM No comments: