Five Books that Influenced Me
by Joel Arnold

In a way, every book I’ve ever read has had some influence on me – at least on a subconscious level. Even a poorly written book, one that barely engages the cerebral cortex (or the ‘little grey cells’ as Agatha Christie’s Hercule Poirot often says) at the very least makes you realize, “I can do better than that!”

A House with a Clock in its Walls by John Bellairs
Not only did this children’s novel introduce me to horror literature, it also introduced me to artist Edward Gorey, whose illustrations were the perfect compliment to the novel.

Where the Red Fern Grows by Wilson Rawls
I read this in the third or fourth grade and remember how completely immersed I was in this story of Billy and his two dogs, Old Dan and Little Ann. It’s about struggle, survival, love, grief and acceptance – a lot of tough concepts for a kid, but the story is unforgettable. I hope I can write something half this powerful some day.

The Shining by Stephen King
Not only did this novel introduce me to Stephen King, it also taught me a lot about writing – about pacing and the rhythm of words and sentences. It also cemented my love for all things that go bump in the night.

Writing Down the Bones by Natalie Goldberg
Of all the books on writing I’ve read, I feel this one is the best for those beginning on their writing journey. It’s not so much about the writing craft as it is about freeing your mind up and letting the words flow, which is an important concept for those writers starting out, and is a great wake-up call for writers experiencing writers’ block.

Lonesome Dove by Larry McMurtry
I’m not even a fan of western novels, but this is probably one of my top three favorite novels of all time. The scope of this story is breathtaking and so well written and crafted, the characters so vivid and brilliant, I’m still in awe at this literary accomplishment. Its influence on me is simply that I wish to be able to write something as good as this someday.

Writing my own novel – Northwoods Deep – inspired me in that I felt like I was able to somewhat successfully write a horror novel with emotional depth, vivid settings and complex characters that – at least I hope – gives chills to those who read it. The novel itself was inspired (very loosely) by Hansel & Gretel as well as some Native American folklore and an early image I couldn’t shake out of my head of an old man creeping up the steps of a cellar, lifting a trap door and ascending into an old cabin in the woods. What exactly was he hiding? 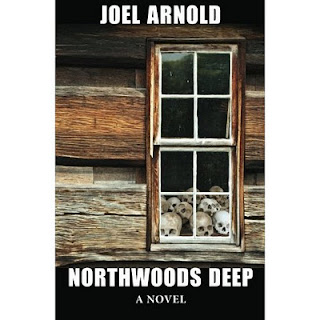 Here’s the description of Northwoods Deep:
Deep in the north woods, two sisters become lost; one stalked by a murderous ex-husband, the other unable to rid herself of the leeches that appear mysteriously on her skin.

All are drawn to an old, dilapidated cabin.

Inside lives an old man with awful urges, accompanied by a Rottweiler possessed by something…unnatural.

But it’s what resides beneath the cabin that they should really be worried about.

Please join award-winning author Joel Arnold on a ride over the river and through the woods straight into terror in his newest novel, Northwoods Deep.

For other ereaders:
www.smashwords.com/books/view/18433

Rachel says: Thanks for your list, Joel! The same happened for me with Lonesome Dove -- had never read or even liked Westerns, but this one... And then, I had to read all of McMurtry's writing! And Stephen King... can't say enough about how he's influenced me as a reader and writer.

What's on your list?
Posted by Rachel Howzell Hall at 7:51 AM