on December 20, 2011, at almost four in the afternoon, at the intersection of Bixel and that street whose name I can never remember but it runs east-west and you can hop onto the 110 South there. I sat at the red light in my car.

That's when my former co-worker Hal walked past me.

But I didn't blow my horn and call out his name. Just wondered why he was walking in this part of town since I had heard he was working over on Sunset now.

Did he hear the crazy homeless man who panhandled at this light shouting at him?

He looked the same as he had when I saw him last, back in 2007. Thin. Too thin. Same style khakis. Same haircut. Hal.

If I blew my horn, would he remember me?

I look the same as I had back then, too. There is that single strand of gray hair in my bangs that wasn't there then...

Was I memorable enough?

And if he didn't recognize me, then that would be awkward.

And so I didn't blow my horn. Just watched him walk east until the light turned green and I drove past that street whose name I can never remember and into the crowd of car.

I think about Hal at least twice at week. The iris bulbs he gave me to plant almost ten years ago are always blooming. 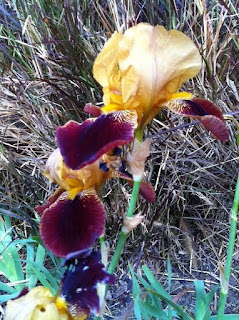 Posted by Rachel Howzell Hall at 8:12 AM

Email ThisBlogThis!Share to TwitterShare to FacebookShare to Pinterest
Labels: What I Saw