On Saturday, January 14 around noon, two signs during my bike ride (yes, I bought a bike, no, I hadn't been bike riding in 11 years, yes, my ass hurt like it had been stomped by trolls, no, I couldn't even relax on the couch later cuz my heart was beating so fast, yes, I'll do it again and no, not this weekend because it's too... too... bright?) from Playa del Rey to El Segundo with my daughter and husband. 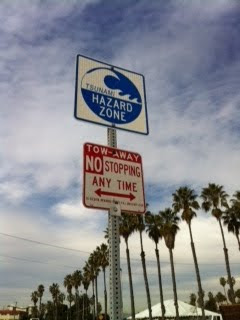 So, yeah, it says Tsunami Hazard Zone. My seven-year old freaks out whenever we see these signs around Marina del Rey. And while we kind of talk her off the ledge, we know that anything's possible even tsunamis. And I like the No Stopping sign beneath it. Don't dilly-dally cuz a wave's a'comin'!

The next sign technically wasn't at the beach. It was afterwards, when we drove to Honeybaked Ham, the one by Big Lots and Winchell's in Culver City. 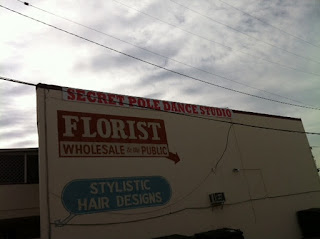 Okay, so the big sign isn't what made me take the picture. It's the sign that borders the top of the building.

What the heck does that mean?

I'd never noticed it until now, with my heart beating so fast.

So, I went to the Googles and lo! The Secret Pole Dance Studio is a Thing!

OH. EM. Awesome. Sounds like a field trip for me and my girls!

But then, will I get pole burn? Guess that will re-direct the pain from bike-butt-blues.

My take-away from The Secret Pole Dance Studio? They need a better sign. And maybe not next to the doughnut shop. I had to pretend not to hear my second-grader ask what is a pole and what do you do on it? That's a fourth grade question answered during that special assembly and you giggle and blush throughout the entire thirty minutes.

Posted by Rachel Howzell Hall at 7:12 AM